ROUTE 2: IN THE FOOTSTEPS OF JEWISH HISTORY

Duration: approx. 35 min (does not include guided tours of individual locations)

Jewish people have lived in the town of Kroměříž since the Middle Ages. The first mention of them in written records dates to 1322, in a document by which John of Luxembourg allowed the archbishop of Olomouc to have one “usurer Jew” to live in selected towns, including Kroměříž. The Jews lived in an enclosed part of the town (in the area limited by today’s streets Moravcova and Tylova), separated from the rest of the town by a high wall. Part of the original wall can still be seen behind the Church of the Assumption of the Virgin Mary. As the number of the Jewish residents increased, so did their privileges, approved by the archbishops of Olomouc. The Jews could thus have their synagogue, cemetery, and schools. It was even established that 21 houses can be built in the Jewish quarter. Before the ghetto was annexed to the town in 1851, it formed a separate political municipality. Shortly before the annexation, the Jews of Kroměříž were granted religious freedom.

The downfall of the community came during the Second World War, when the Jews were deported to the Nazi concentration camps where they were systematically murdered – among them 259 Jews from the former Kroměříž Jewish Community. In the honour of these 259 victims, the town installed a series of “stumbling stones” – Stolpersteine – which were placed right into the pavement all over Kroměříž. These concrete cubes bear a brass plate with every individual’s name and life dates and are installed right outside the home where the victim last lived before deportation. To date, a total of 15 Stolpersteine were installed in four places in Kroměříž. 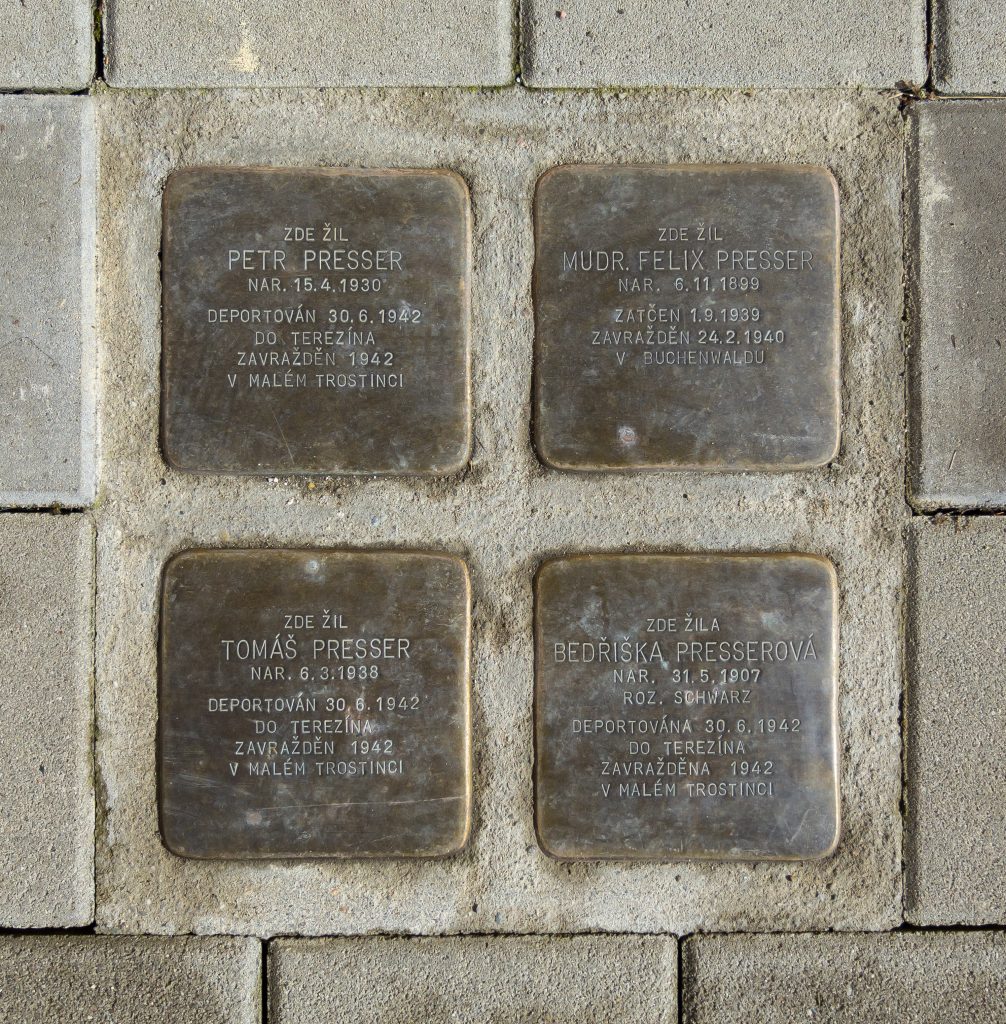 A – Stolpersteine in Kollárova street

Four Stolpersteine were installed in Kollárova street outside the house no. 528/1 in memory of Doctor Felix Presser and his family. Felix Presser died in the Nazi concentration camp Buchenwald in 1940. His wife Bedřiška and his sons Petr and Tomáš were murdered in the Belarusian concentration camp Malý Trostinec in 1942. The Stolpersteine were installed by the town hall in April 2019. 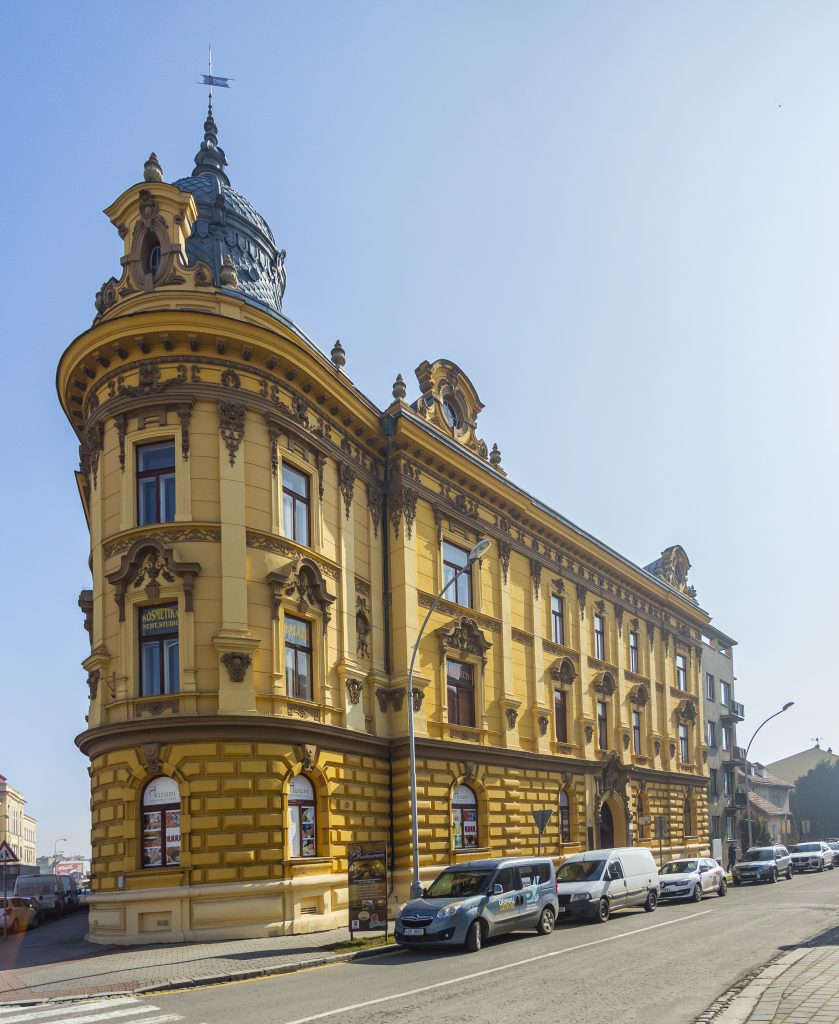 Simons Tenement was built at the end of the 19th century by Ladislav Mesenský the Elder. For 50 years (1948–1998) the building housed the town library. 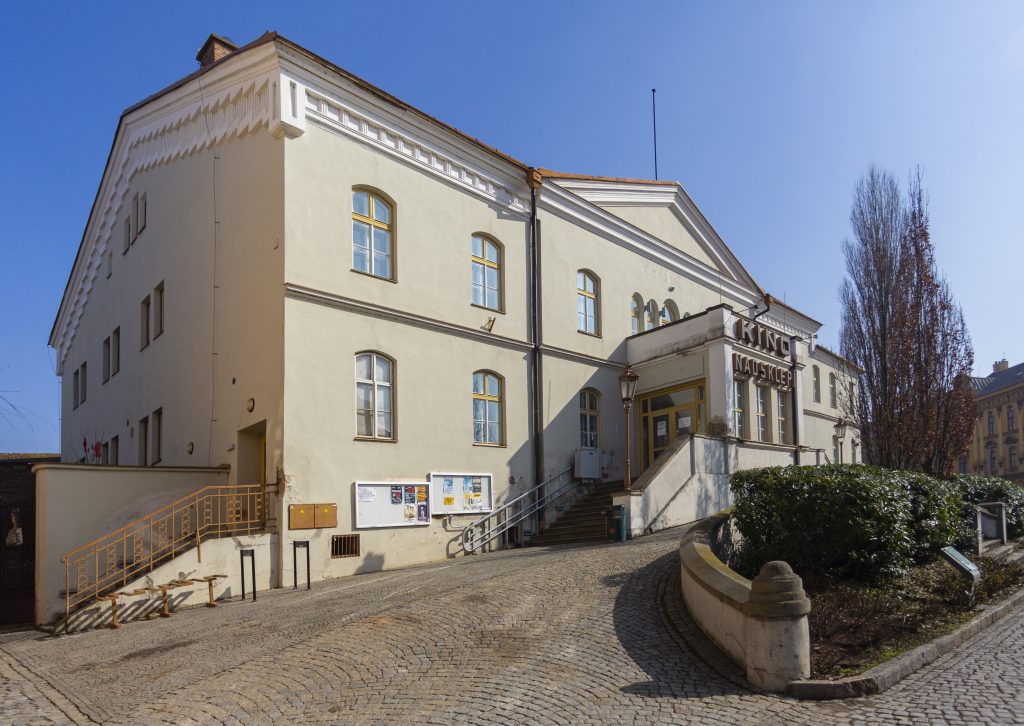 In 1866, brewery cellars (icehouse) were built on the site of a former filled-in moat and only two years later, the building of Nadsklepí (lit. “above the cellars”) was built above them. Nadsklepí became the cultural centre of the town as it held balls, concerts, lectures, and theatre performances. Nowadays, the building houses the town cinema. 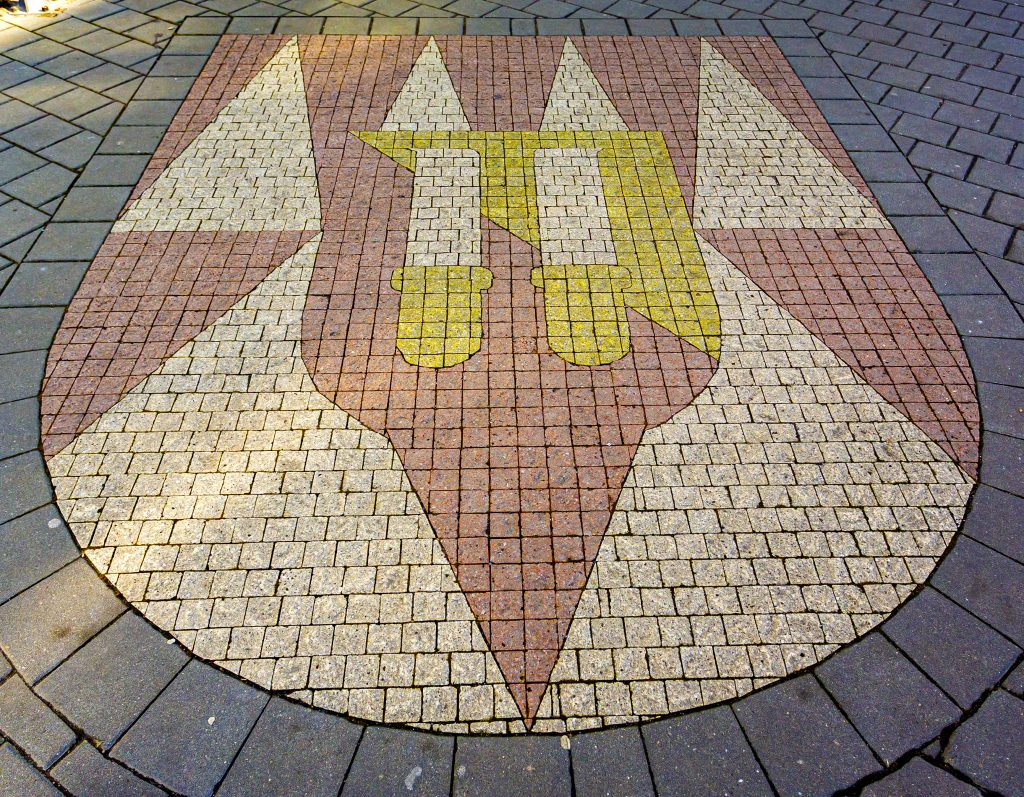 3 – Coat of arms of Kroměříž and the Mill Gate

The most important long-distance roads (from Brno and from Olomouc) led to the original main town gate, which stood approximately in the place where the coat of arms of Kroměříž is placed in the pavement today. The Gothic prismatic tower formed a part of the town fortification. Originally, it included a second tower (a passage tower) which was connected by a bridge that led over a deep moat. The town gate was destroyed in 1857. 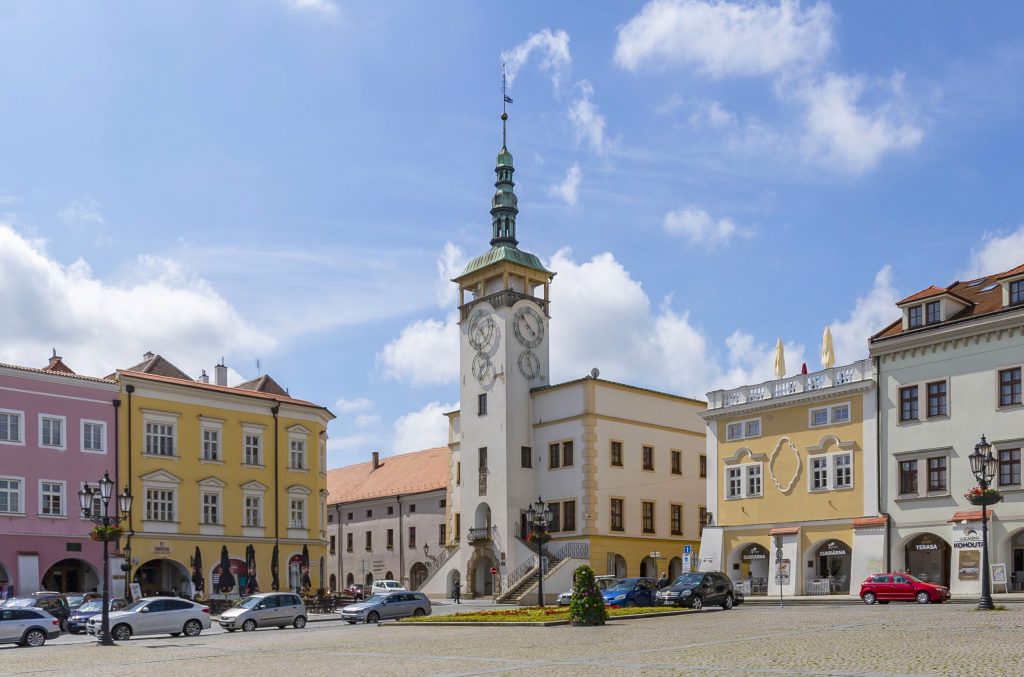 One of the dominant features of the town dates to the 16th century and it has undergone several reconstructions and changes since then. It suffered the most damage after the departure of the Swedish troops from the town in 1643. The most significant reconstruction took place in the 19th century, when the second floor was added to the building. The gem of the Town Hall is the original clock with two faces (one shows the hours, the other the minutes) on each side of the Town Hall tower. 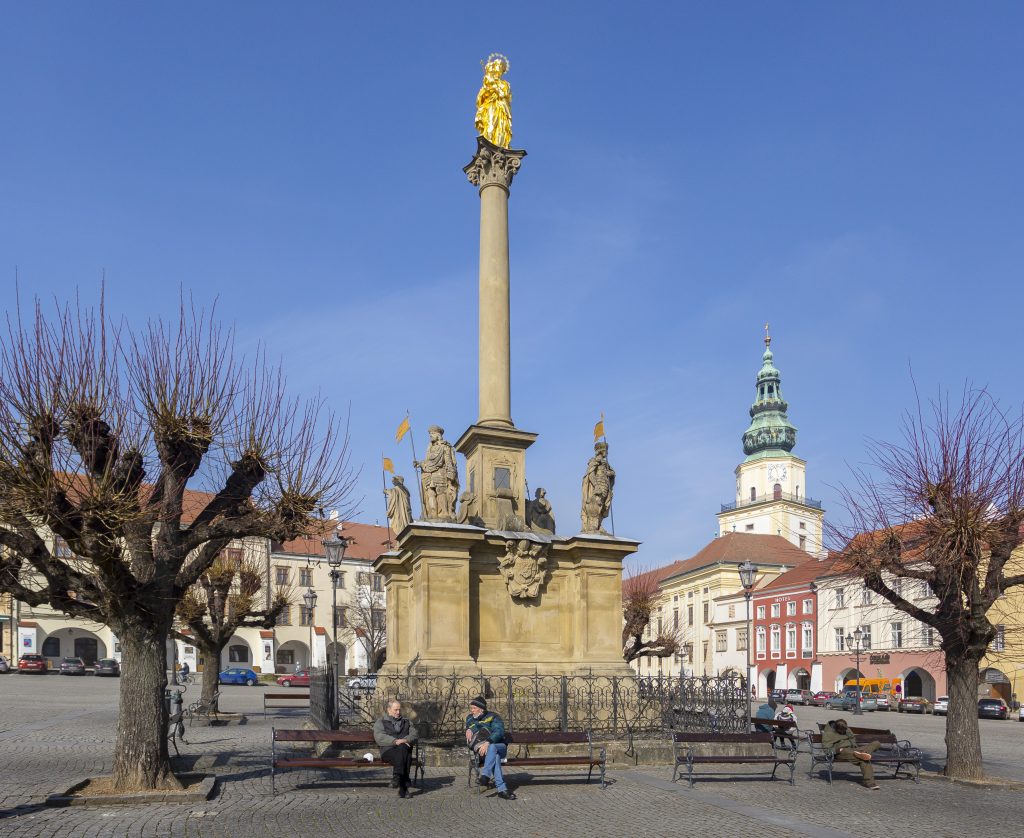 It was built in 1681, just after the town was hit by a plague epidemic. The statues placed at the base of the column represent St. Wenceslas, St. Maurice, St. Roch, and St. Florian. In 1978, the column was declared a cultural monument. 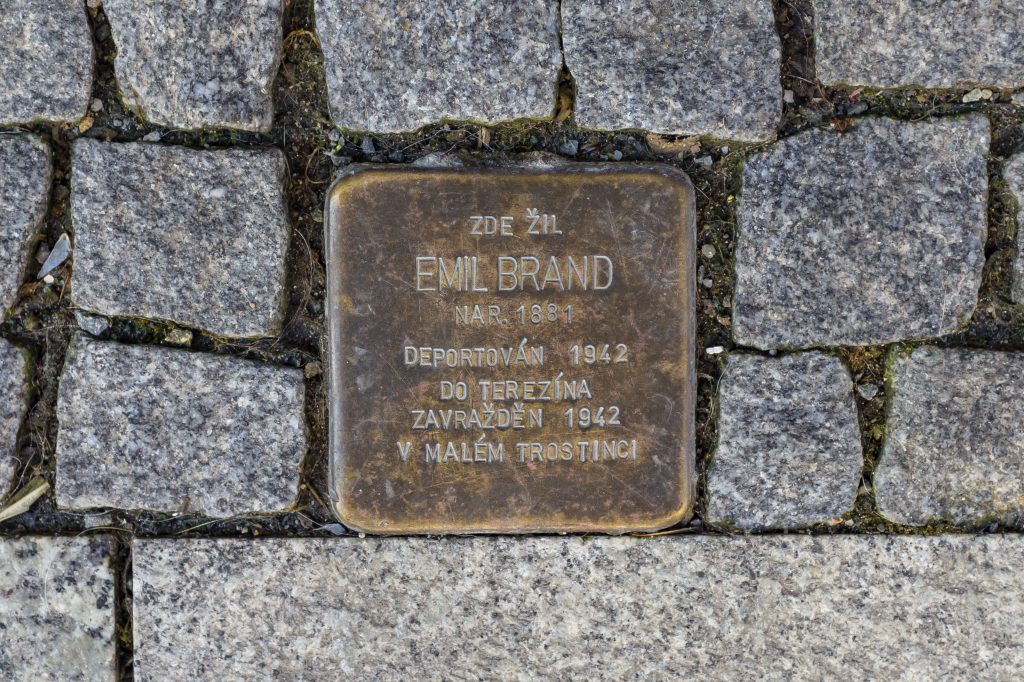 B – Stolperstein at 83/4 Vodní street

This was the first Stolperstein to be installed in Kroměříž. Since 2014, this Stolperstein has been commemorating Emil Brand, the former owner of the corner café (on the site of which a new Baťa shoe store was built in 1930). The Stolperstein was installed right outside the house where Brand then lived. The cube bears a brass plate inscribed with his name and life dates. 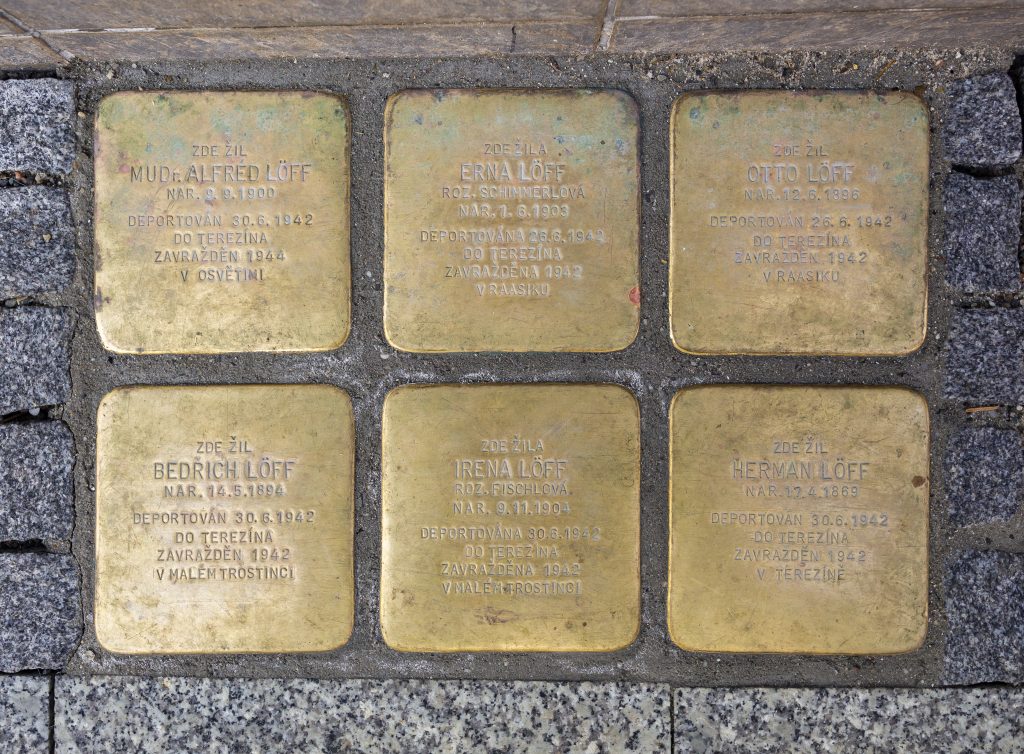 A total of six Stolpersteine were installed in memory of Doctor Löff, his brothers and his children. All of them disappeared from Kroměříž in 1942 and each died in a different concentration camp (in Poland, Estonia, Belarus, and Czechoslovakia). 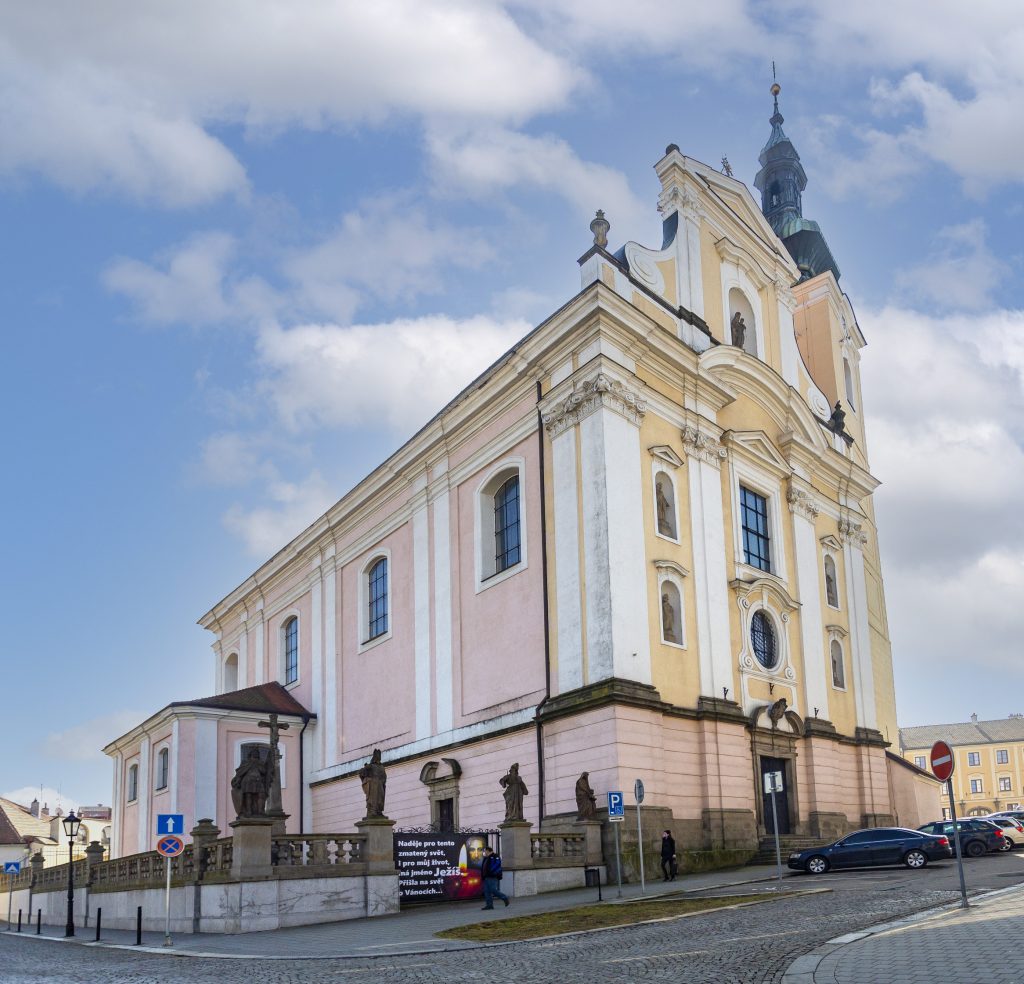 6 – Church of the Assumption of the Virgin Mary 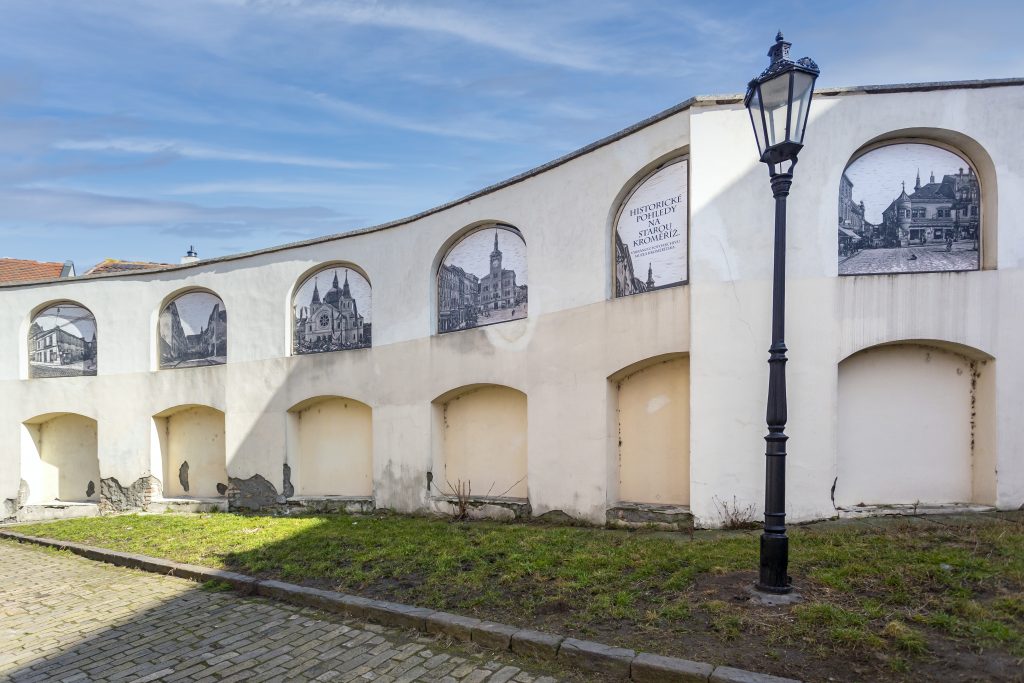 D – Remains of the wall around the former Jewish quarter

The Jews lived in a ghetto separated from the rest of the town by a high wall which bishop Karl II von Liechtenstein‑Kastelkorn had built around 1680. Part of the original wall can still be seen behind the Church of the Assumption of the Virgin Mary, near the “Palace Emeritus” building. From the side of the church, the wall was originally decorated with representations of the Virgin Mary’s life (these paintings have not survived). Today, the niches are decorated with graphics of Kroměříž and its surroundings, which were installed for the town’s 2016 tourist season. 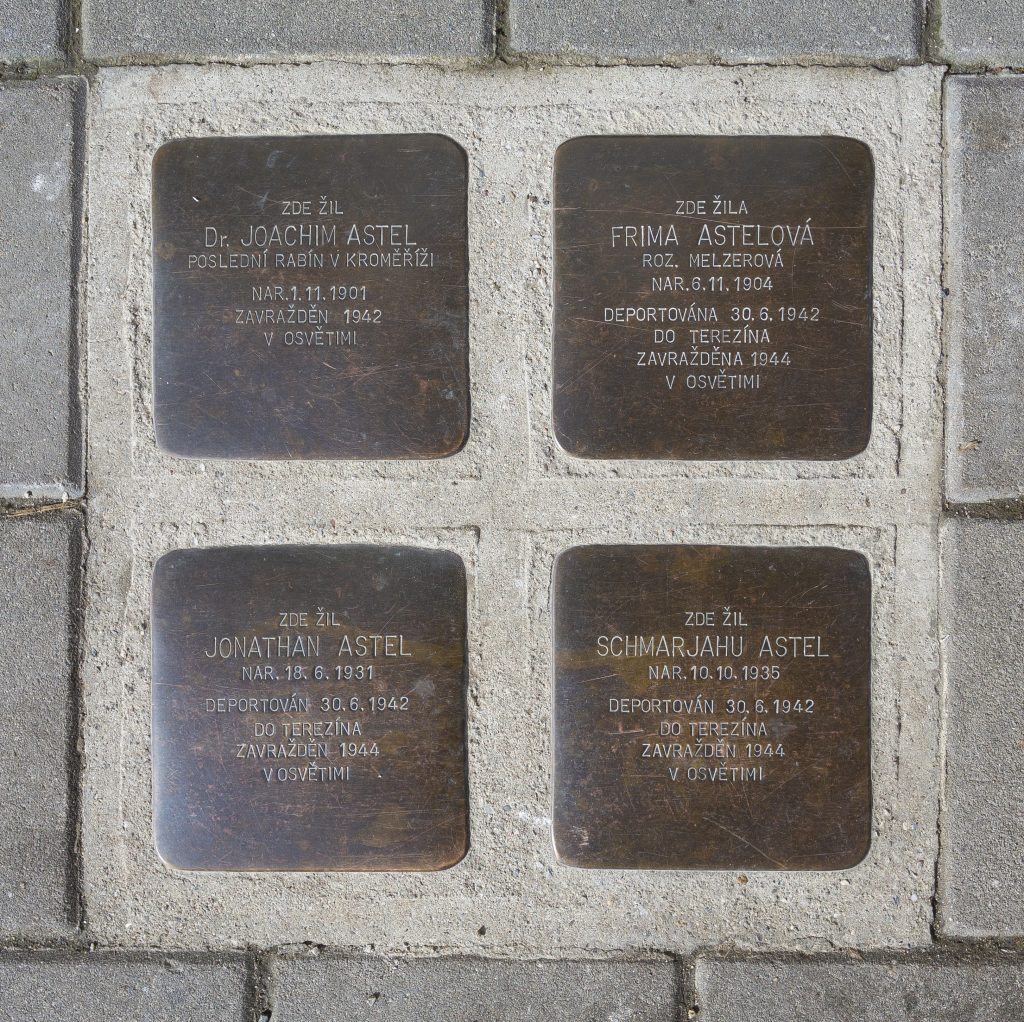 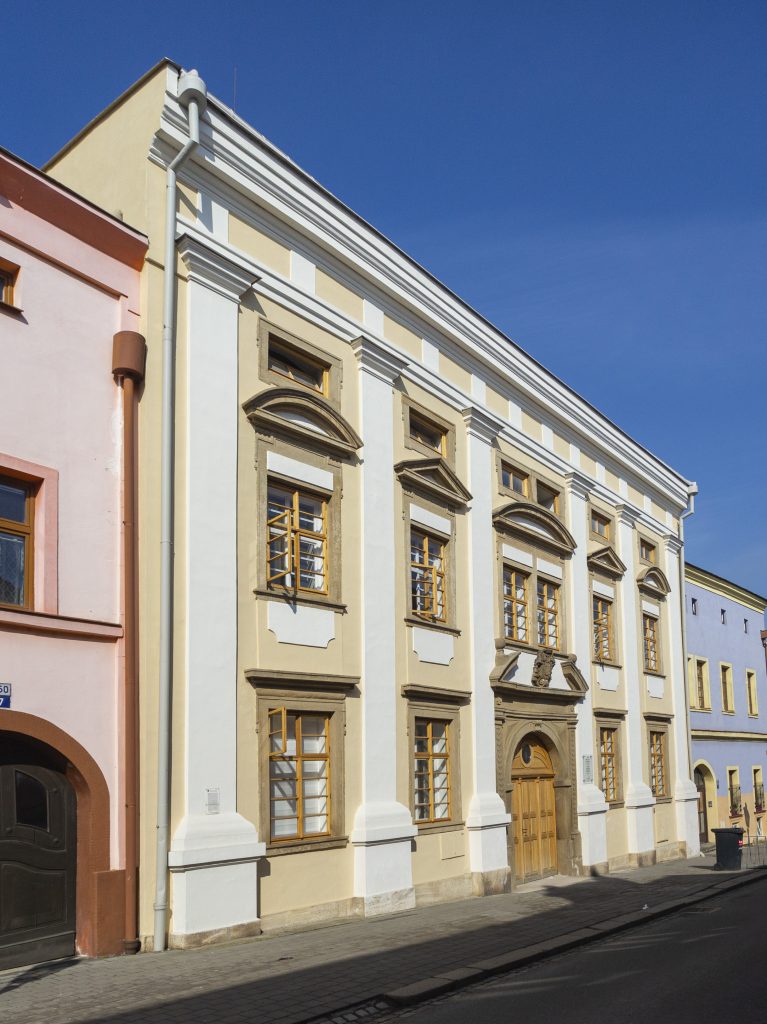 The most important building of the former Kroměříž Jewish Community – the Jewish Town Hall – could be found at 259/9 Moravcova street. The author of the unique Baroque building was the architect Giovanni Pietro Tencalla. In addition to the Jewish municipality, the building housed a Winter prayer hall and was also the home of the rabbi. The land for the construction of the Town Hall was donated to the Jewish Community by bishop Karl II von Liechtenstein‑Kastelkorn. The building was renovated around 1720 and retained its appearance even after the reconstruction in the 1980s. 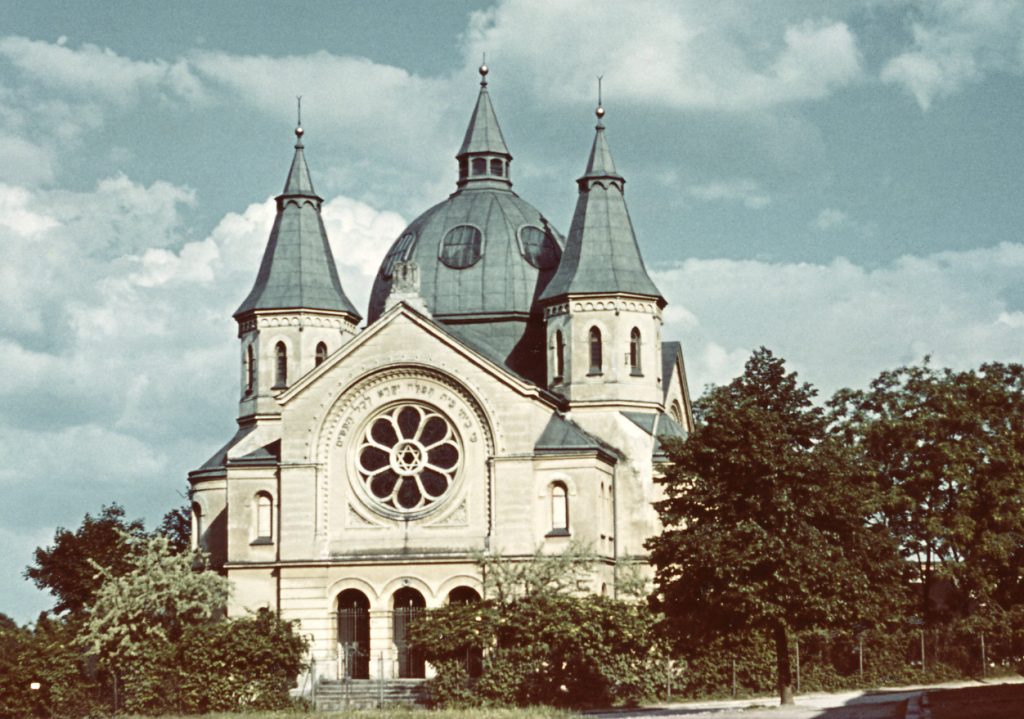 G – House of Culture (the location of the last Synagogue)

The Old Synagogue originally stood in Moravcova street from 1693 until the beginning of the 20th century. It was then replaced by a New Synagogue, which stood in the Komenského náměstí square on the site of today’s House of Culture. In 1910, the building was completed and inaugurated. Thirty-two years later, it was blown up by the Nazis. 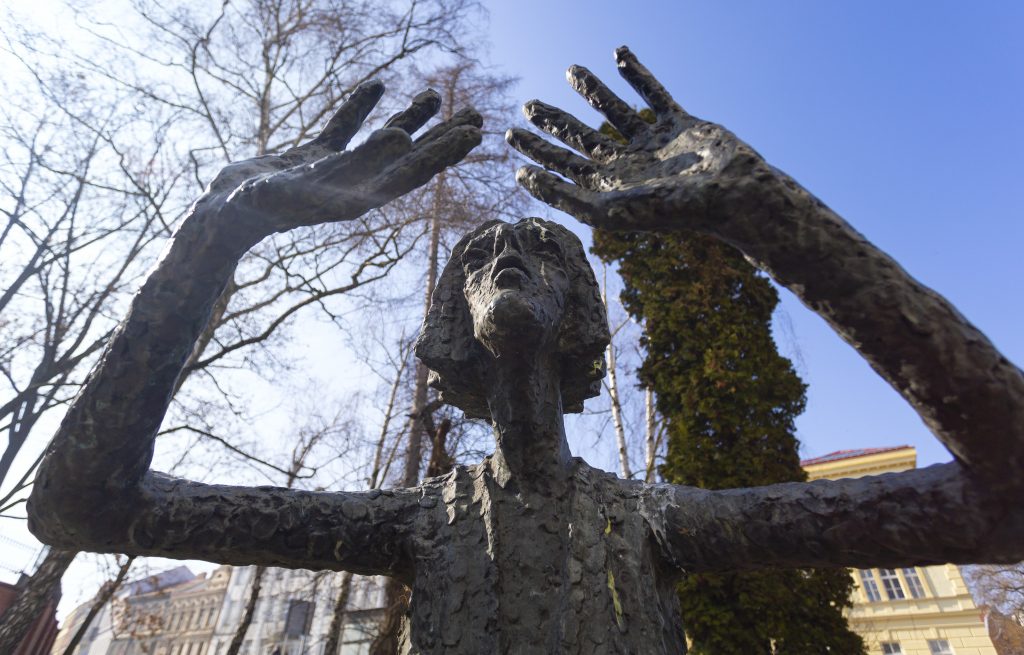 The memorial by Olbram Zoubek commemorates the original building of the New Synagogue and at the same time the 259 Jews from Kroměříž who became victims of the Holocaust and died in concentration camps during the Second World War. The memorial stands next to the House of Culture.